Modern Mars rovers are large pieces of equipment. The current 'new' rover, Curiosity, is the size of a Mini-Cooper car. This size has a draw back. Rovers of the size of Curiosity, despite the robot arm it carries, cannot access all of the possible sites it encounters. Therefore there are 'missed opportunities' in the mission. Ziggy is designed to fill that gap, by being deployed from a larger 'mother' rover, moving off to access small sites, collecting samples and data then returning to the mother rover to pass on any samples such that they may be analysed by the mother rover and pass on data to be forwarded to Earth.

Ziggy is controlled by a PICAXE micro-controller 28X1 Picaxe chip on a AXE020 project board. Ziggy has an ultrasonic range finder to allow it to navigate and avoid major hazards.

Ziggy has an interchangeable payload/science system called 'SPIDERS' (Science Package Instruments and Detectors) that allow the payload to be mission selected. We have SPIDERS that will allow us to retrieve soil samples, map exposures and send a probe into 'caves' through some of the skylight formations that have been detected on Mars. 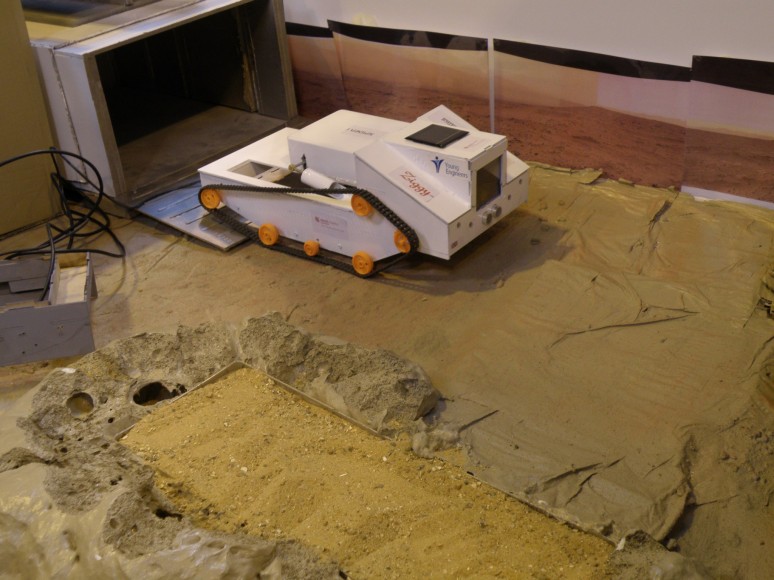 The development of Ziggy is listed by prototype, below:

A simple chassis with wheels driven by two motors, controlled by a set of switches, tethered for control and power.

This mark was the category winner at Big Bang Near Me.

This mark was Exhibited at the Big Bang @ Parliament

Third cab chassis, LED lights, track system, a web cam, powered by electric motors, controlled by a PICAXE board and chip, tethered for camera, on board power, on board re-charger, ultrasonic range finder, third SPIDER developed.

This mark was Competitor at National Big Bang Finals, Appeared on Channel 4 Sunday Brunch, Exhibited at the Science Museum

Further marks of Ziggy will have: