Celebrating integrity and humanity with presentations from Patrick Hutchinson and our wonderful sixth formers #BlackHistoryMonth2021 https://t.co/lYVUGTZekr

Click below to see our first newsletter of the academic year: https://t.co/OSayKIn7HJ

Delighted to welcome more than 150 Y7 students to our summer school. A brilliant way to start your new school! https://t.co/RO6pT6PK6z

Congratulations to our amazing year 13 students for their hardwork over the the last two years. We wish you the best of of luck in your future endeavours. #alevelresults2021 https://t.co/F9DtDMdU4K

Full story of our recent award as a World Class School! https://t.co/14qL2pYu0y

Congratulations to Daniel Falode (Yr 13) for securing a place at Harvard College. https://t.co/jWJfB4neY3

We’re delighted to welcome students back from Monday 8th. Come along to our online presentation tomorrow night and hear about all our plans including covid testing. Invites will be text out tomorrow

Congratulations to Bisola, David, Naz, Nicholle & Soraya in Year 13 for being runners up in the group category for this year's @RTMusicUK Battle of the Bands competition. Check out their performance here https://t.co/mCWrBTrNZl

Congratulations to Soraya in Year 13 for winning the solo performance in this year's @RTMusicUK Battle of the Bands competition. Check out her performance here https://t.co/HMdYwSjbpc

Thanks to @BBCYoungReport for hosting a 'Real News' webinar with our Year 10 students. We learnt some interesting ways to verify facts and challenge misinformation.

Check your inboxes today for our first newsletter including the lowdown on all things MS Teams, reasons to be cheerful and another chance to offer us your feedback on virtual school. Have a great day

KS3 parents: come and join us tonight at 6pm to hear about the plans for our refined virtual school. We’d also love to hear your thoughts about what we could do to improve. Invites have been texted out. See you there

@leannestewart72 We’re sorry to hear that things have been difficult today and I apologise if our communication didn’t land well. Get in touch on our info@ email and we can look at how we can help

We know there’s a lot to take in following the latest lockdown announcement. We will work through the details tomorrow and communicate to all families as soon as possible. Stay safe.

@Michael54424819 Hi Michael - central government have made their position 100% clear: schools, nationwide, need to remain open. We are simply following that direction.

Cuttlefish is a lifting body design, powered by two ducted turbo fans and an Estes solid rocket motor. It is designed to take off like an ordinary aircraft, fly as a normal aircraft to a given height. Cuttlefish then, makes its way into orbit powered by a rocket motor. On its return journey back to Earth, after re-entry it then re-ignites its jet engines and flies back to its base.Cuttlefish, as a model of the space plane, is controlled in two ways. It is flown by a human pilot via remote control while in the jet flight phase and while in range of the radio transmitter. During the rocket phase it is flown by its on-board auto pilot (based on a PICAXE board) with (either non mercury tilt switches or a gyro/accelerometer chip) and an SFR005 ultrasonic range finder to navigate the vehicle back into range. The system will also be capable of landing Cuttlefish unaided.Other aspects of Cuttlefish will be controlled by the PICAXE system including deploying the landing gear and automatically igniting the rocket motor. Cuttlefish's target altitude is a maximum of 2000 feet (the maximum allowed by the CAA). 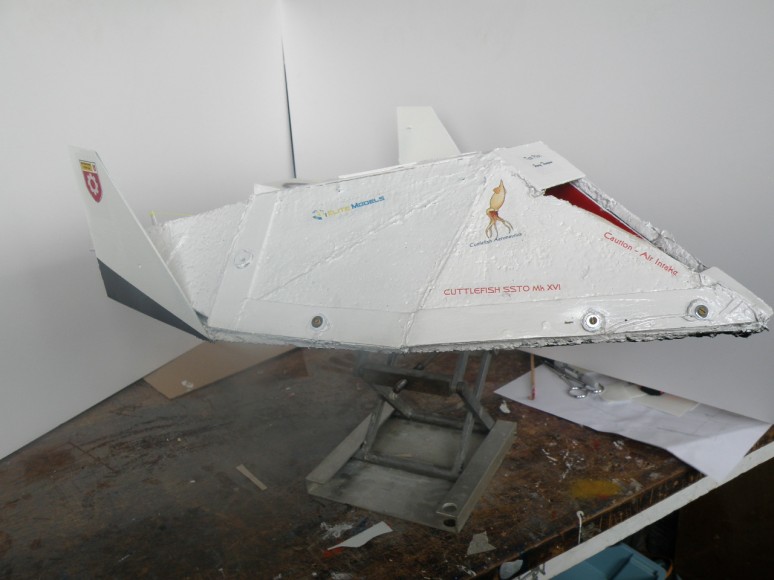 The team realised that a smaller 'drone' version of the airframe, with simplified electronics/guidance systems, carrying a cargo of water purifiers, military ration packs, simple emergency shelters, air launched from military cargo aircraft, could carry immediate aid, by air into sites of disaster such as earthquake zones etc. to provide rapid aid to areas that cannot be easily accessed due to the disaster.

2015 entry into Big Bang Near Me Fair

The development of Cuttlefish is listed by prototype, below:

Second, larger balsa/polystyrene versions each mark with varying control surfaces and positions. These versions of Cuttlefish are true lifting bodies and do not require stub wings or canards to fly.

Further marks of Cuttlefish will have: